Miles Airport is situated approximately 45 k’s from the town of Chinchilla on the Leichhardt Highway. A major expansion of the aerodrome began in 2013 to meet the needs of the coal seam gas industry, culminating in the construction of a new terminal which was completed in February of 2016, the result of a $30 million investment by Origin.

CASA certification was obtained in August of 2015 and the aerodrome caters for FIFO, General Aviation & Agricultural ops. Passenger movements currently sit at circa 1800 per month.

AMS commenced management of the aerodromes on the 1st of October, and we look forward to working with the Western Downs Regional Council for the duration of the contract. 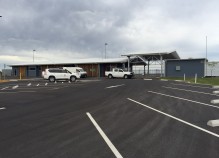