Weipa Airport is located on the West Coast of Cape York Peninsular in Queensland, about 200 kilometers from the most northerly point of Australia. Weipa is just south of Duyfken Point, a location now agreed to be the first recorded point of European contact with the Australian continent by Dutch explorer William Janszoon.

Weipa Airport has been managed by AMS since the 1st of June 2012 with local personnel including Aerodrome Reporting Officers, Security Screening and Aerodrome Management. The Airport Operations are mixed with a blend of Regular Public Transport and General Aviation aircraft frequently operating to the aerodrome.

The Airport Operations team are complimented by a team of Aviation Security Personnel who undertaken passenger screening and checked baggage screening 7 days a week. 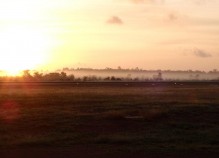